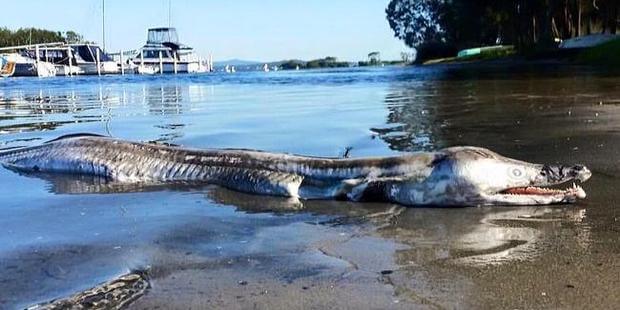 This image has gone viral on social media and is being widely reported by news platforms after Ethan Tippa posted it on Facebook Monday morning asking “What the f*** is it?”

This bizarre looking creature reportedly washed up at Swansea in New South Wales, Australia. It has features that resemble a mix between a crocodile, dolphin, and an eel!

Australian Museum ichthyology manager Mark McGrouther told Australian media the creature appeared to be a nocturnal feeding pike eel, which could grow to 1.8m in length, has an elongated body, a long slender jaws and large teeth.

Another opinion comes from Marine biologist Dr. Julian Pepperell who also agrees that the specimen is almost certainly a pike eel. The species is found throughout the Indo-Pacific Ocean and has often been reported in the coastal waters of New South Wales, eastern Australia… so it seems the mystery is solved.

The ocean never ceases to amaze us, does it?